I was reading a blog post published recently titled??and to be fair the purpose of the post was to introduce.

But in the process, the author made the same mistake I've seen time and time again.

It can be anything where people like or dislike something.

The biggest error people make is to consider a simple score like this:

There is an old article titled??and I quote:

Then you may think, I know how to fix it:

Again, this is wrong, and again I quote:

And I quote again:

I recommend you read the?original article?but let's cut to the chase. If we follow the original post I linked in the beginning, I have a simple blog post Rails app, but instead of a?visits_count?field I need to add a?positive:integer?and?negative:integer?fields and user interface to post votes.

And I will replace the?PostWithPopularityQuery?class with the following:

And this is what I expect to see in a simple scaffold?index.html.erb: 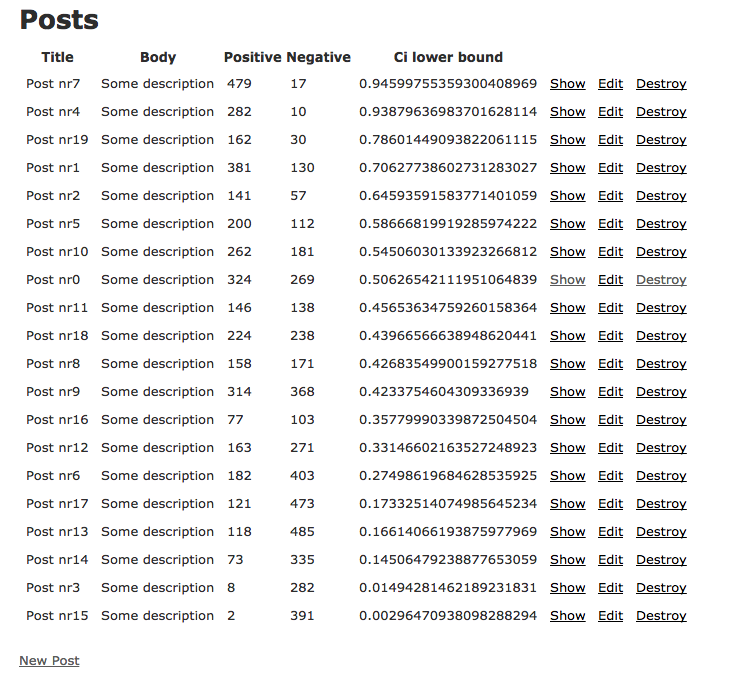 I would even go as far as recommending the?ci_lower_bound?to be a float field in the table and to have an asynchronous ActiveJob to update it in some larger interval of time (every 5 minutes, for example) and then the?PostsController#index?action would perform a straight forward?SELECT?query ordering directly against a real indexed field?ci_lower_bound DESC?without performing the calculations on?every?query.

And this is not the only way to do it. There are dozens of good discussions of algorithms online. Every service that depends on content popularity have been refining algorithms like this for years. Facebook used to have an algorithm called "EdgeRank" which relied on variables such as Affinity, Weight, Time Decay, and it seems to have evolved so much that it now calculates popularity against more than?100 thousand variables!!

But regardless of the online service, I can assure you that?none?sorts by simple visits count or simple average votes count. That would downright wrong.